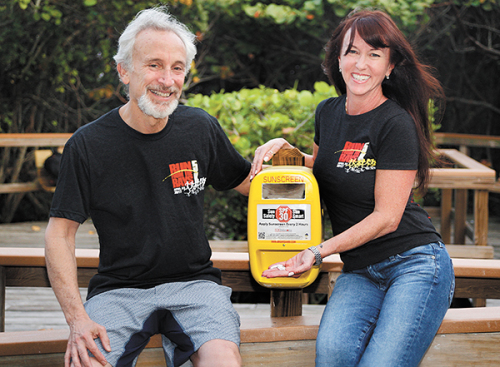 Nathan and Fran Nachlas, of Boca Raton, with the SafeSun sunscreen dispenser they installed at South Inlet Park. Nathan, a reconstructive surgeon who operates on people’s faces after melanoma removal, and Fran, a nurse, founded SafeSun, a not-for-profit venture, with their four children five years ago.
-Tim Stepien/The Coastal Star

It’s one of those ideas so simple, so obvious, so vital, that it’s a wonder somebody didn’t think of it sooner: Put free sunscreen dispensers in local parks, making it easy for people to protect themselves from sun damage and skin cancers.

The sunscreen dispensers are the result of a partnership among the Palm Beach County Parks and Recreation Department, the Richard David Kann Melanoma Foundation in West Palm Beach and SafeSun, a nonprofit organization founded by a Boca Raton family.

For all of them, it’s personal.

“We would really like to get them in more parks, playgrounds and soccer fields,” said Fran Nachlas, a surgical nurse who founded SafeSun with her husband, Nathan, a reconstructive surgeon.  “There should be sunscreen for the kids. There’s no reason not to.”

The couple’s four children all played at parks and sports fields.
In their professional roles, Fran and Nathan Nachlas work to repair the effects of melanoma. The cancer has  touched their personal lives. Nathan lost an uncle, age 50, to melanoma. He has had skin cancers removed from his legs, a result of sun exposure in his teens.

“We don’t want people to give money for staples and paper,” said Fran, who grew up in Delray Beach and attended Atlantic Community High School. The Nachlas family lives in Boca Raton and Nathan practices there. “We wanted to make an impact for local charities. It’s very personal.”

Working through the Kann Melanoma Foundation, SafeSun sponsored the installation and maintenance of a sunscreen dispenser at South Inlet Park on the beach in Boca Raton.

Fran and Nathan Nachlas founded SafeSun in 2012. Both are runners and triathletes, so since 2013 SafeSun has  sponsored Run From the Rays, a series of races in Boca Raton  that have raised $143,000. They also sponsor a local Martinis for Melanoma fundraiser.

Their four children participate in activities to raise awareness of skin cancers, such as working with Students Against Melanoma and providing information about sun damage to after-school kids clubs.

SafeSun also contributes to the dermatology clinic at Caridad Center, west of Boynton Beach, which treats a number of workers exposed daily to the sun. Fran and Nathan Nachlas contribute to the Moffitt Cancer Center in Tampa and the Lynn Cancer Institute in Delray Beach.

When she found out about the sunscreen dispensers, Schobelock worked to get the first one installed at Okeeheelee Golf Course. Now other dispensers are at Coconut Cove Waterpark in Burt Aaronson South County Regional Park, North County Aquatic Complex, Juno Beach Park Pier and Ocean Cay Park.

Since there are more than 80 regional, district, community, beach and neighborhood parks in the Palm Beach County system, where children and adults play and picnic under the blistering Florida sun, the partners are hoping other groups and individuals will join them in sponsoring more dispensers, which cost about $500 each.

The dispensers provide a thick, high-quality organic product that does not harm marine life, said Schobelock, who uses the product when she visits Juno Pier. Though she generally doesn’t make a big deal of it, Schobelock says she, too, is a melanoma survivor.

“I was a person who grew up in and on the water — on the gulf coast of Alabama, Perdido Bay — and I’ve been in Florida 35 years. For me, it’s kayaking and paddleboarding.”

When Schobelock was 28, “my mother noticed a mole on the back of my knee, about the size of the end of my pinky finger. She bugged me until I went to the dermatologist, because my father had had some squamous cells.”

The back of a woman’s knee, a spot seldom looked at, is a common site for a cancerous spot to develop, Schobelock’s oncologist told her.

Fran Nachlas constantly monitors how her family’s donations are being spent, and chose the Kann Foundation because she approves of the organization’s careful use of money.

“I’m not just handing over money blindly,” she said. “I know where every penny goes.”

Putting sunblock and preventive messages at beaches and parks locates these resources exactly where there are young people, those most vulnerable to skin cancers and most in need of skin cancer education, she said.

“People get most of their sunburns before age 18,” said Fran Nachlas. “Skin cancer is preventable. It’s sad when it doesn’t really have to happen.”

For more information about sun safety, visit www.pbcsplash.com. To sponsor a sunblock dispenser, or for information about melanoma, contact the Richard David Kann Melanoma Foundation at 655-9655 or melanomafoundation.com.
Read more at: The Coastal Star