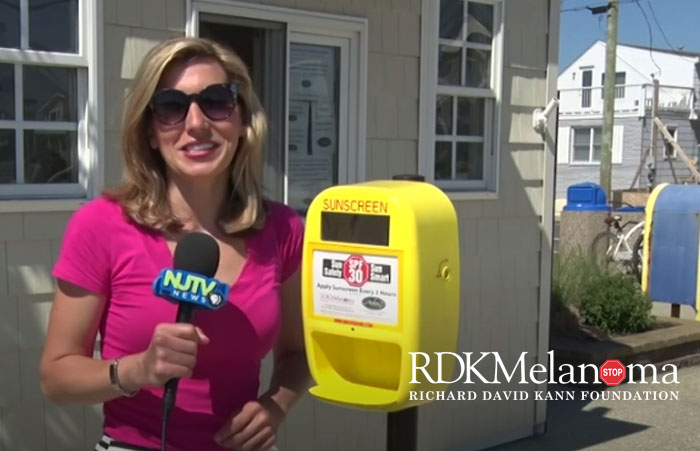 Avalon resident Elyse Focht doesn’t worry about forgetting sunblock at the beach anymore because the Cape May County borough is providing it for free.

“With my skin I burn very easily,” she said. “In fact I’ve had a couple skin melanomas removed myself.”

Which is why Focht presented Avalon Business Administrator Scott Wahl with the idea this past spring after she learned about the Richard David Kann Melanoma Foundation’s efforts to distribute sunscreen dispensers at schools, parks, beaches and other outdoor areas.

The borough added the sunscreen dispensers in May. There’s another one located about nine blocks away at a children’s park. It’s become so popular that Avalon has had to refill the dispensers several times already. Just to put that in perspective, once a dispenser is filled up, it can provide up to 2,000 squirts before it’s emptied out.

Wahl says Avalon paid for the dispensers and the foundation provided an initial, huge supply of sunscreen.

“When we saw the sunscreen dispensers, they are a school bus yellow and instantly your eyes are attracted to them, so we thought that this would be an outstanding opportunity for parents to have discussions with their children. In the event they forgot their sunblock heading to a day at the beach, we provide for them,” Wahl said.

“By simply protecting yourself with sunscreen, especially early in life, you can probably reduce your chances of skin cancer, some estimates are 50 to 80 percent,” said dermatologist Dr. Lawrence Paolini. “Compared to early in my career, say in the late 80s to now, we’re probably increased 50 to 70 percent the incidents of skin cancer.”

“I always say that if someone could spend a week in my office just seeing the patients that come in with skin cancer they’d have an entirely different view on how good it is to get a tan in the summertime,” he said.

The New Jersey Department of Health indicates 2,349 residents were diagnosed with melanoma of the skin in 2015. Nationwide more than 5.4 million non-melanoma skin cancers are diagnosed each year. That’s more than all other cancers combined, according to the American Cancer Society.

Wahl says Avalon’s sunscreen dispensers are getting a tremendous amount of attention.

“This here is great because sometimes you’re busy. You have kids and you forgot,” said Pennsylvania resident Boo Smith.

“Other towns have noticed, too. Immediately we get calls from other towns saying, ‘how did you do it, what’s it all about, how do we get involved in this,’” said Wahl.

Focht hopes these little yellow dispensers will make a big impact. Her hope?

“Just to keep as many people away from getting skin cancer as possible. If this stops somebody from picking something up then it’s great. We’ve done our job,” she said.