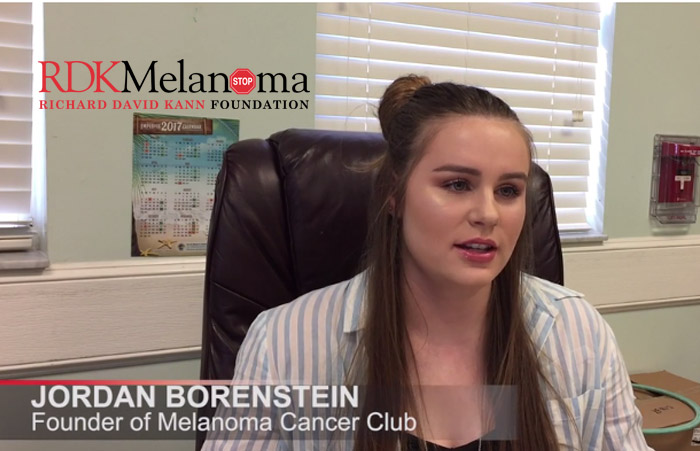 Jupiter, Fla. (November 20, 2017) – A team of Jupiter High School students, called RAY Band, is proud to announce a list of public venues that they have donated Sunscreen Application Machine’s (SAM) too. Ray Band, in partnership with the Richard David Kann (RDK) Melanoma Foundation, was one of the Palm Beach Philanthropy Tank winners and received funds to place ten SAM units locally to help those in the community make sun safe choices when outdoors. On Tuesday, November 21, 2017, beginning at 10 am, four dedications of these Sunscreen Application Machine’s will take place in various locations.

During her freshman year of highschool, Jordan Borenstein founded the Melanoma Cancer Club in West Palm Beach. Since it’s founding, it has acquired 60 members. Borenstein has been advocating for sun screen dispensers to be put in public places. They are currently in the planning phases.

From an early age, Jordan Borenstein understood the dangers of skin cancer and the importance of its early detection and prevention.

Click here to read more and view the video at: SunSentinal

The first dedication will take place at 10 am at Loggerhead Marinelife Center in Juno Beach (14200 US Hwy 1, Juno Beach); the second dedication will be at Jupiter Outdoor Center (1116 Love St. in Jupiter) at 11 am; followed by a 12 pm dedication at Jupiter Community Center and Jupiter Tequesta Athletic Association (JTAA) (200 Military Trail, Jupiter). The fourth and final dedication of the day will be at 1 pm at the Jupiter Country Club (126 Rosalia Court, Jupiter).

The RAY Band, selected these locations to have sunscreen dispensers because they are highly visited areas in the town of Jupiter and Juno Beach. The SAM units will be placed in ideal locations where visitors as well as camps will have access to sunscreen.

“All of the locations that RAY Band selected are well-visited by children and families,” said Jordan Borenstein, RAY Band organizer and Jupiter High School SAM Club President. “We are thrilled that we are able to help our community be sun smart and have access to sunscreen.” “Skin cancer is the most common cancer in the United States and most cases of melanoma, the deadliest form of skin cancer, are caused by exposure to ultraviolet (UV) light. Let’s strive to eliminate Melanoma and protect our community from the harmful effects of the sun.”

About RAY Band:
Last March, RAY Band competed in Palm Beach Philanthropy Tank, one of Florida’s most innovative programs that funds philanthropic, community-betterment ideas presented by Palm Beach County students. Team RAY BAND was one of nine student-finalist teams to pitch their ideas during a live event to a panel of four local philanthropist-investors. As a result, RAY Band went home with $8,500 and a year of one-to-one mentoring from their philanthropist-investor and mentors.

Looking ahead, RAY Band plans to continue a working relationship with the Richard David Kann
Melanoma Foundation and Gardens Dermatology & Cosmetic Surgery Center to install SAM units in other local parks and heavily visited areas in Palm Beach County and the State of Florida.

About Richard David Kann Melanoma Foundation:
The Richard David Kann (RDK) Melanoma Foundation has been working locally and nationally for over 20 years to educate students grades K-12 on the importance of sun safe behavior and raise awareness about the life-saving techniques for early detection of skin cancer, especially melanoma, its deadliest form. Their newest initiative involves the distribution of sunscreen dispensers in parks, beaches, schools, and outdoor areas, where sun exposure is excessive. The unique Students Against Melanoma (SAM) Clubs in middle and high school, and the SunSmart America™ curricula, programs, and resources, have educated hundreds of thousands of students, families and communities on sun safety behaviors and techniques for prevention and early detection of skin cancer. To learn more visit melanomafoundation.com.